The Ontology of Space 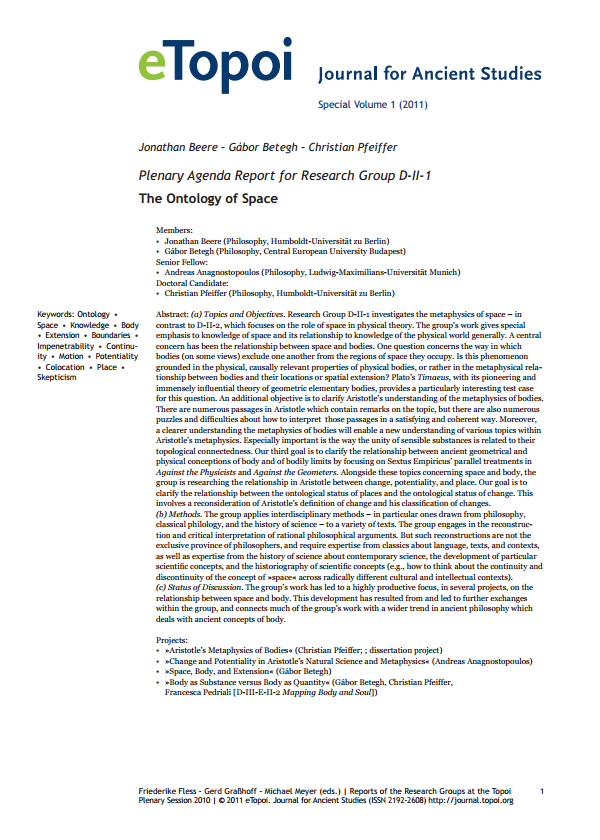 Abstract: (a) Topics and Objectives. Research Group D-II-1 investigates the metaphysics of space – in contrast to D-II-2, which focuses on the role of space in physical theory. The group’s work gives special emphasis to knowledge of space and its relationship to knowledge of the physical world generally. A central concern has been the relationship between space and bodies. One question concerns the way in which bodies (on some views) exclude one another from the regions of space they occupy. Is this phenomenon grounded in the physical, causally relevant properties of physical bodies, or rather in the metaphysical relationship between bodies and their locations or spatial extension? Plato’s Timaeus, with its pioneering and immensely influential theory of geometric elementary bodies, provides a particularly interesting test case for this question. An additional objective is to clarify Aristotle’s understanding of the metaphysics of bodies. There are numerous passages in Aristotle which contain remarks on the topic, but there are also numerous puzzles and difficulties about how to interpret those passages in a satisfying and coherent way. Moreover, a clearer understanding the metaphysics of bodies will enable a new understanding of various topics within Aristotle’s metaphysics. Especially important is the way the unity of sensible substances is related to their topological connectedness. Our third goal is to clarify the relationship between ancient geometrical and physical conceptions of body and of bodily limits by focusing on Sextus Empiricus’ parallel treatments in Against the Physicists and Against the Geometers. Alongside these topics concerning space and body, the group is researching the relationship in Aristotle between change, potentiality, and place. Our goal is to clarify the relationship between the ontological status of places and the ontological status of change. This involves a reconsideration of Aristotle’s definition of change and his classification of changes. (b) Methods. The group applies interdisciplinary methods – in particular ones drawn from philosophy, classical philology, and the history of science – to a variety of texts. The group engages in the reconstruction and critical interpretation of rational philosophical arguments. But such reconstructions are not the exclusive province of philosophers, and require expertise from classics about language, texts, and contexts, as well as expertise from the history of science about contemporary science, the development of particular scientific concepts, and the historiography of scientific concepts (e.g., how to think about the continuity and discontinuity of the concept of “space” across radically different cultural and intellectual contexts). (c) Status of Discussion. The group’s work has led to a highly productive focus, in several projects, on the relationship between space and body. This development has resulted from and led to further exchanges within the group, and connects much of the group’s work with a wider trend in ancient philosophy which deals with ancient concepts of body.

Jonathan Beere, Gábor Betegh and Christian Pfeiffer, "The Ontology of Space", in: Reports of the Research Groups at the Topoi Plenary Session 2010, eTopoi. Journal for Ancient Studies, Special Volume 1 (2011), 1–9