Space as Transformed in the History of Science. Historical Epistemology of Space: Experience and Theoretical Reflection in the Historical Development of Spatial Knowledge (Junior Research Group) 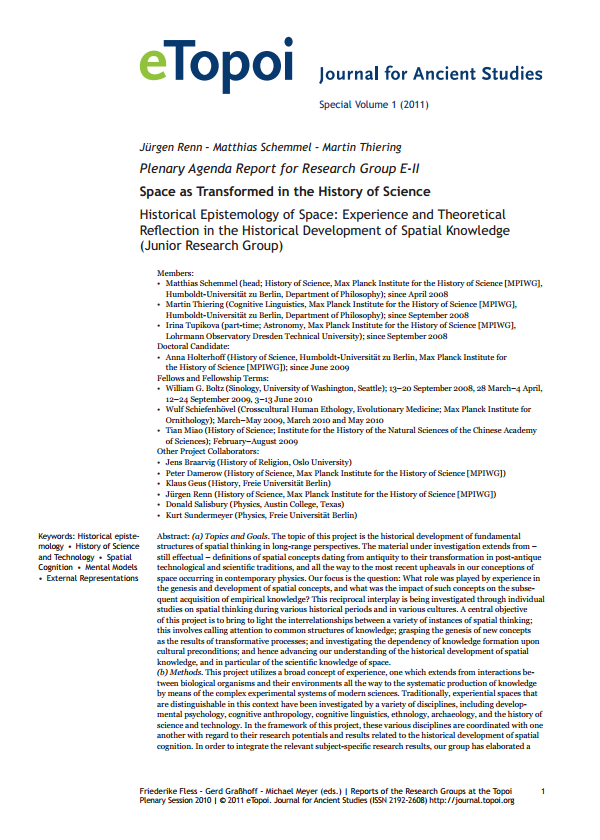 (a) Topics and Goals. The topic of this project is the historical development of fundamental structures of spatial thinking in long-range perspectives. The material under investigation extends from – still effectual – definitions of spatial concepts dating from antiquity to their transformation in post-antique technological and scientific traditions, and all the way to the most recent upheavals in our conceptions of space occurring in contemporary physics. Our focus is the question: What role was played by experience in the genesis and development of spatial concepts, and what was the impact of such concepts on the subsequent acquisition of empirical knowledge? This reciprocal interplay is being investigated through individual studies on spatial thinking during various historical periods and in various cultures. A central objective of this project is to bring to light the interrelationships between a variety of instances of spatial thinking; this involves calling attention to common structures of knowledge; grasping the genesis of new concepts as the results of transformative processes; and investigating the dependency of knowledge formation upon cultural preconditions; and hence advancing our understanding of the historical development of spatial knowledge, and in particular of the scientific knowledge of space. (b) Methods. This project utilizes a broad concept of experience, one which extends from interactions between biological organisms and their environments all the way to the systematic production of knowledge by means of the complex experimental systems of modern sciences. Traditionally, experiential spaces that are distinguishable in this context have been investigated by a variety of disciplines, including developmental psychology, cognitive anthropology, cognitive linguistics, ethnology, archaeology, and the history of science and technology. In the framework of this project, these various disciplines are coordinated with one another with regard to their research potentials and results related to the historical development of spatial cognition. In order to integrate the relevant subject-specific research results, our group has elaborated a joint theoretical framework which is designed to define the individual research activities and correlate them with one another. This entails the development of a specialized terminology for the description of space and knowledge. We distinguish between the following spaces of experience: (1) The immediate experiential space of the individual in the process of ontogenesis is the proximal environment, within which he/she moves and acts with objects and also interacts with other individuals. (2) The space of movement of a society is the natural and man-made local environment within which individuals or specific groups of individuals move. This space can be relatively extensive even for non-literate societies, as exemplified by certain Micronesian societies which are distributed across widely separated islands. The society’s space of movement may also transcend the spatial boundaries of the inhabited territory, for example in cases of military campaigns, expeditions, or voyages of discovery, which do not correspond to a stable extension of this territory. (3) The organized space of a society is the territory which is politically controlled and economically administered. (4) Cosmological space is the entire universe known, or assumed to exist, by a given society. (5) Technical-experimental space is the space accessible to a society by means of technical devices and systematic experimentation. We further distinguish between a variety of forms of knowledge, including anthropomorphic, instrumental, mathematical, and theoretical types. These distinctions are applied in the research fields characterized above. (c) Current State of Discussion. One essential result of this research is the insight that the development of spatial knowledge is intimately bound up with external representations of knowledge, such as coordinated action; orienting landmarks; the lexical and grammatical structures of written and spoken language as expressing spatial relations; instruments of measurement and navigation; geographic maps; and geometric formalisms – from those embodied in Euclid’s Elements to the field equations used in the general theory of relativity. The analysis of external representations makes possible an understanding of the long-term development of knowledge structures in terms of socially shared mental models. External representations of knowledge serve to communicate and transmit knowledge from one generation to the next, and from one culture to another. In other words: the analysis of these representations is the central method of this project in its investigation of the social reproduction of knowledge. This perspective is being further developed in the course of the group’s studies on the dynamic relation between experience and cognitive structures in various historical epochs and cultures. Currently in preparation is a joint publication entitled “Spatial Thinking and External Representation”, in which the research results of the group will be assembled and related to one another.

Matthias Schemmel, Martin Thiering and Jürgen Renn, "Space as Transformed in the History of Science. Historical Epistemology of Space: Experience and Theoretical Reflection in the Historical Development of Spatial Knowledge (Junior Research Group)", in: Reports of the Research Groups at the Topoi Plenary Session 2010, eTopoi. Journal for Ancient Studies, Special Volume 1 (2011), 1–11