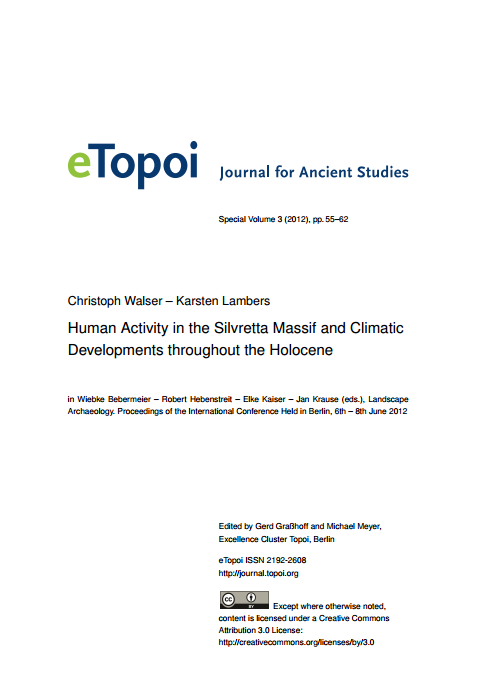 The Silvretta Massif is a mountain range on the Swiss-Austrian border. Apart from a few well known Bronze and Iron Age sites in the Lower Engadin valley, the Silvretta has been more or less a kind of “archaeological terra incognita”, especially in the (high) alpine zones. Hence a multidisciplinary study named “Rückwege” was initiated by the Department of Prehistory at the University of Zurich (Th. Reitmaier) in 2007. The project’s main goal is to explore alpine dairy farming, in particular its beginnings.

Alpine regions like the Silvretta Massif are highly sensitive to climatic variations that affect alpine land-use and economy. Therefore at the end of 2010 another research program, entitled “CCA—Climatic Change in the Alps: 10,000 years of climatic and human impact in the Sivretta Massif between the Paznaun Valley (Austria) and the Lower Engadin (Switzerland)”, was initiated. This project, which consists of an archaeological (K. Lambers, University of Bamberg) and a palaeoecological part (J.N. Haas, University of Innsbruck), is focusing on the reconstruction of the environmental and the settlement history of the Silvretta from the end of the last ice age until the 20th century, with particular regard to human-climate interactions. To understand these processes a well-founded, wide data base is indispensable. In 2011 a complementary field survey was therefore undertaken between Val Lavinuoz and Val Sinestra in the Swiss part of the research area, and Montafon valley and Fimber valley in the Austrian part. We recorded around 200 hitherto unknown sites covering the whole Holocene.

The climatic influence on human activity and its impact on settlement behaviour within the study area shall here be discussed using the examples of the Bronze Age, the Roman period and the late Middle Ages or Modern Period.